Are there any benefits to having ADHD?

ADHD comes with a set of traits.

One example is not holding a grudge. I’ll break it down the way I see it and try to show elements of how “detrimental” traits are beneficial.

Impulsivity and Emotional Dysregulation from ADHD can balance out. The ADHD trait of emotional dis-regulation makes me get angry quickly and often. Conversely I have learned that the ADHD trait of missing social cues has made other people angry.

I combine these two scenarios and my behavior is tempered and balanced.

Add in the clarity of thinking from the dopamine dump of being angry (ADHDers have reduced levels of dompamine in certain areas of the brain) I can be rational about not taking action based on anger when I am angry.

Knowing all this makes it easy for me to cut people slack even if I am agitated. An added benefit is that many people realize they can express their feelings to me and feel they have been heard.

The ADHD trait of non-linear thinking allows me to remember seemingly completely irrelevant past events in this particular way.  Practical examples are solving very difficult and complex problems or clearly thinking and making good decisions in high stress or dangerous situations.  I have done this as an engineer solving problems on the flight line and also my previous career flying Medical Evacuation Helicopters (MEDEVAC).

The lower levels of dopamine in the Pre-Frontal Cortex and the Striata are believed to be a physiological trait of ADHD. This trait is confirmed for me with clear thinking when some external event or internal visualization gets dopamine to these areas. Other than drugs that that get dopamine working are situations and activities that are meaningful and urgent to us. These are situations where there is great personal gain or loss at stake…we get rich, we get fired or we get killed.  The best part is that we can visualize or recall these situations and still get dopamine.

Flying a MEDEVAC helicopter safely but as fast as possible knowing that my passenger is dying is a situation where my ADHD traits helped. The adrenaline makes me alert and the increased dopamine gives me clear thinking. In this state I can make sure I don’t break the aircraft or get lost and the hyperfocus along with non-linear thinking makes sure I am completely engaged in every system of the aircraft, alert for any dangers, power lines and towers.

How does ADHD traits help someone who works in a cubicle world? As an engineer I’ve had to deal with lots of technical obstacles that needed non-linear thinking to reach a solution because there were too many factors to consciously consider.

By the way, the image of engineers being a black-or-white left brained linear thinker is wrong. Engineers like to solve problems creatively so don’t think we’re not flexible because we provide detailed solutions and are unspoken to the implications of the complexity and interdependence of the actions required.

When a there is a major obstacle and there are meetings and arguments about how to solve a problem my ADHD puts me in a dopamine comfort zone. You could even say I get into a State of Flow. To me the system becomes a living animal, the optimized performance lives in my head. Then equations and values start entering the “feel” of the task providing detail on the constraints and connection with the physical world. My reliable subconscious begins background tasks crunching the numbers and countless factors involved.

Then I take a break get some coffee and surf the web for a bit. My ADHD and subconscious like it and they get to work. This method has resulted in elegant, innovative, money saving and efficient solutions. Oh yeah, nice paychecks too.

To wrap this up this ramble I’d like to mention the ADHD trait of inconsistency. This is important too. If we were always going hypersonic and hyperfocused we would never rest and recover.

If asked if there was benefit to ADHD and I answer yes.

My dad was classic ADHD and a doctor in the Emergency Room. He used this ADHD traits in similar ways I described above to solve lives. However, his ADHD played a role in him burning out. He drove himself hard and ADHD traits wreaked havoc both professionally and personally. If there was just some way I could have tapped into that “let’s go ride bikes” trait of ADHD.

I don’t think he saw value in rest and recovery. Any break he took involved self-medication by smoking which was beneficial in him focusing, reducing the inconsistency from ADHD but detrimental to his health.

Having had a father like this it pains me greatly to hear about how parents are pushing their ADHD kids to do extra studying to “keep up”. The summer camps to “keep the gains” from the school year is criminal. I feel kids deserve a break to recover and allow their brains to naturally diverge on wonderful paths.

The wrong lesson was taught to these parents, it sends the message that their child’s true nature is defective and needs to be denied not refined. Fettering and suppressing the mental energy in our youth that has brought about great innovation, insight and progress in today’s world is purely detrimental.

We live in a world that is changing at a pace so rapid that what is valuable today is worthless, outdated and obsolete in less than a year. Trying to compensate for poor methods of learning, living and working is an inefficient and non-sustainable approach. Don’t think so? Just think of all the electronics that won’t work with today’s software. What about all the industries that used to be in the U.S. that no longer exist or are on life support? How about all those “college educations” that are not of any value in today’s workplace.

Throughout history countries have fallen, dynasties ended and cultures have been erased because of the delusion that “the old ways” somehow would continue to provide the same benefits as in the past. It has always been the companies, countries, civilizations and cultures that refined the old-ways into new-ways that grew and prospered.

Similarly, forcing ADHD traits to comply with current ways of living, learning and working is exhausting and soul crushing.

Using ADHD traits to fuel growth and accomplishment in new ways towards self-determined goals is life enhancing and has been personally profitable. I put my energies into refining what traits I do have. I train my ADHD students and clients to do the same.

Now, I’ve got to put my laundry in the dryer because it’s been in the washer since yesterday…

Chaos and Calamity are my Muses

Chaos and Calamity have always been a part of my life.  Chaos has always pushed my abilities.  Calamity has helped my resilience.

ADHD may have been the origin of Chaos and Calamity and without these two muses I would have never heard the call of adventure.

You see it was not just my ADHD that played a role in my life, my parents both showed classic ADHD traits.  My dad an Emergency Room Doctor and my mom an Emergency Room Nurse.  Both of them working with the products of some of the worst chaos and calamity that life can bring.  I followed a similar path as a MEDEVAC helicopter with the motto “If your’e dyin’ we’re flyin'” I actually got painfully bored if Calamity didn’t present me with a mission.

You see we didn’t feel forced to deal with calamity and chaos we thrived on it.  After a lot of research on this matter I know that I indirectly NEEDED what Calamity and Chaos brought.  With these two muses I got a shot of adrenaline and dopamine.  So did my parents.  Those two neurochemicals produced an effect that erased ADHD effects.  It wasn’t just the life-or-death situation it was the neurochemicals that got us clear headed and focused.  Where others may have choked or freaked out we are clear headed and alert thinking with lightning speed, taking life-saving actions with skill and efficiency.

The effect I am describing is found in my “ADHD and the Dopamine Performance Curve” book available from this website.

This is a blog post to be used as an example blog post
This is a check to see if blog content shows up in excerpt.

Useful mindfulness doesn’t come from reading books or actually meditating.  All this information and contemplation must be applied to be useful.  Without this connection to our inner and outer worlds no benefit will be realized.

Devoting a lot of time meditating can make you feel good and going around telling everyone how much you meditate really doesn’t help you or others.  How you relate with yourself and others is what can be enhanced by your improved mindfulness.

Try and see where mindfulness can fit when you are off the cushion.  It might sound backwards but often come from conflicts we have with the world.  What we don’t like in the world shows us what we value or desire.  When we fall short of expectations or are misunderstood by people it can show a something we overlooked in ourselves or others.

This website and group is what I have done for creating mindfulness for everyday situations.  Useful Mindfulness Website

Do your homework before your coaching call.

Once you’ve chosen your coach and have committed to sessions, do research to make most of the precious time on your coaching call.

Don’t go into coaching without knowing what you want to work on.  Even if you don’t know exactly what it is and can’t describe it, say what you want the result to look like.

Don’t go to a coach for advice, or choosing the best planner, or time management tips.

Actively wind down in the evening.

One way to wind down in the evening is to recap what happened that day.

Lots of good things can happen.

Regardless of the way the day went.

Plans to make progress – if the day was filled with distration and lack of focus. 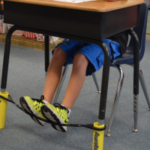 These are used in schools.  It provides some resistance for a bouncing foot.  Genius!

Why I think it’s genius?  It allows the rhythmic motion of a body part.  Sitting still and having the brain be active is difficult for me and probably for people with still developing frontal lobes…like kids up to young adults in their 20’s.

Life is full of emotions.  Understanding how you feel and how to navigate through the ever changing emotional landscape is vital.

Dr. Alan Watkins presents a new way to visualize emotions and proposes evaluating them subjectively by being an observer.  A perspective that has a large mindfulness component.

Can’t sleep? Then get to work!

I don’t think drugging or forcing yourself to sleep regular hours is productive. Sleep therapists are starting to think so too.

The 9 to 5 culture is based on factories and tending machinery.  In today’s world this is becoming less of a requirement.